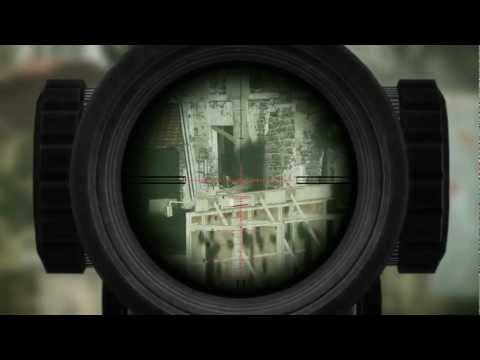 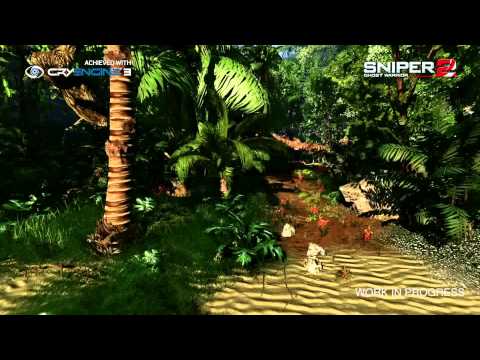 Expirience the power of CryEngine3 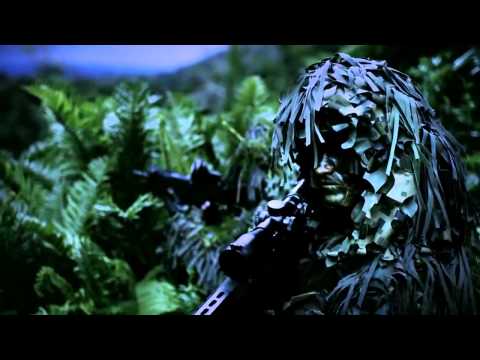 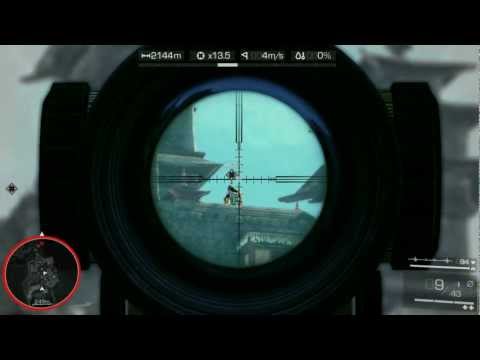 The battlefield is your playground 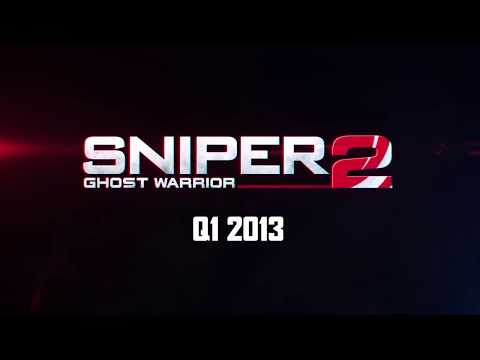 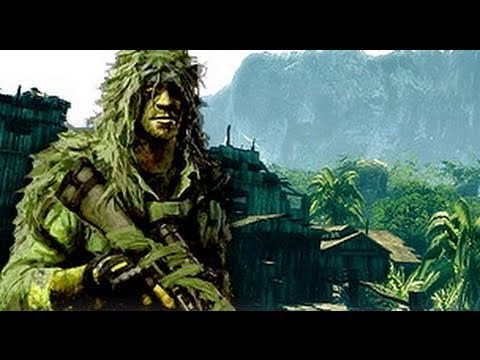 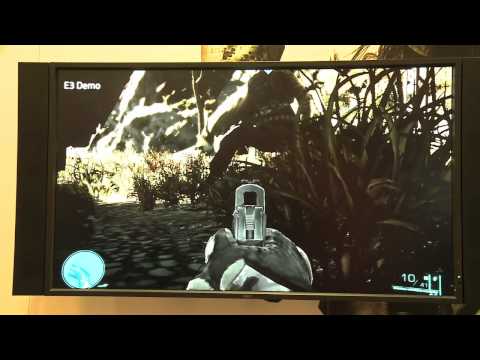 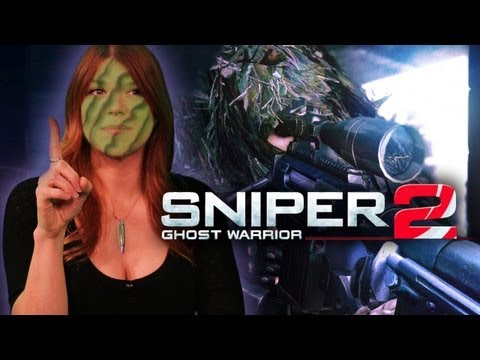 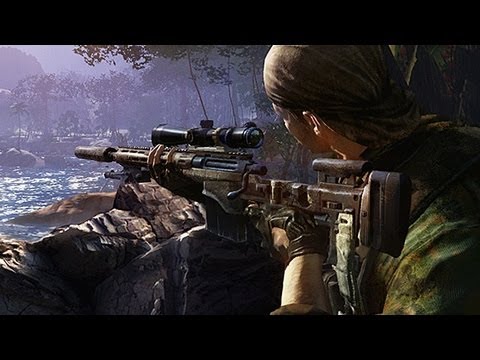 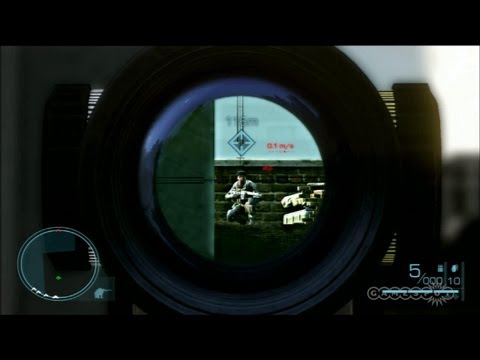 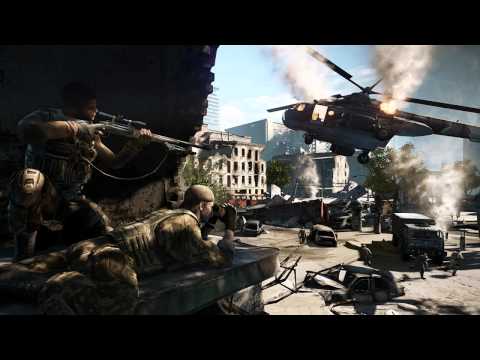 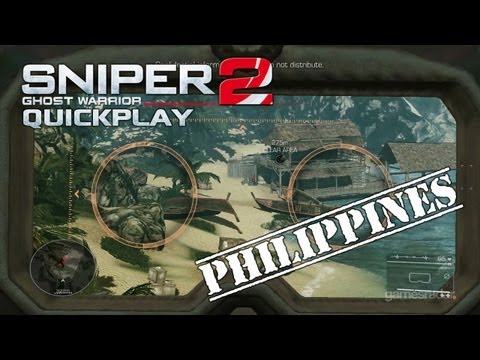 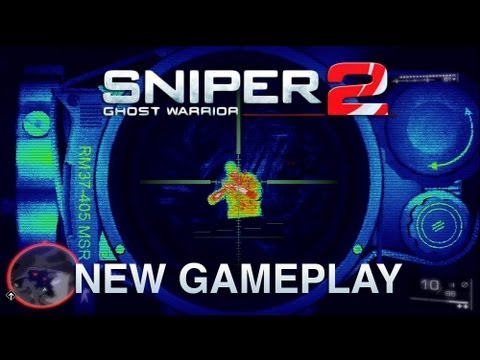 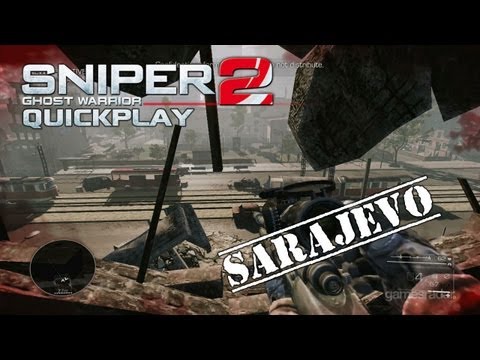 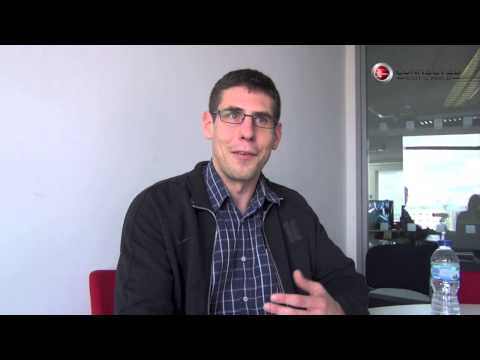 DEVELOPER INTERVIEW BEHIND THE SCENES 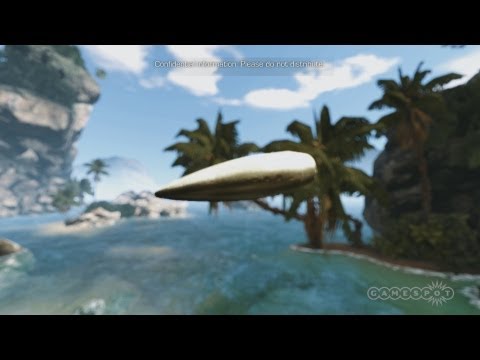 Sniper: Ghost Warrior 2 is the only multi-platform, first-person, modern shooter exclusively designed around the sniper experience. It takes the bulls-eye precision of its predecessor to new and exciting heights, offering more diverse sniper challenges; a rebuilt AI system and the thrilling “one shot, one kill” precision that made the original a huge hit, selling 3 million copies worldwide. Taking advantage of the advanced capabilities of the CryENGINE3, Sniper: Ghost Warrior 2 also delivers striking graphic environments.

The Artificial Intelligence (AI) system was completely re-tooled and designed from scratch. Here’s what’s in store for you:

• Tactical Intelligence. Enemy combatants are now tactically aware and much more unpredictable as they respond differently depending on the situation. So if you ever are discovered, expect everything from flanking movements to frontal assaults as the enemy tries to engage you in close quarters where your rifle is less effective.

• Enemy Behavior. In-game enemies vary their level of aggressiveness depending on the size of their unit. Pairs of sentries are more cautious then a platoon-size unit whose aggressiveness is much greater. Word to the wise: recon the area carefully before engaging.

• Cover & Concealment Enemies now seek the nearest cover as they fire and maneuver against your position.

Sniper: Ghost Warrior 2 only features sniper missions, and we have included every variable and technique needed to be a successful sniper. It is the closest you can get to the real thing without joining the armed forces. The new comprehensive system of sniping mechanics reflects all the critical factors that go into being a successful hunter of gunmen (HOG).

• Real-World Ballistics: many factors impact the effectiveness of the sniper, and Sniper: Ghost Warrior 2 has included every single one, from wind direction to bullet-drop.

• Human Factors: as in real-life, it is critical for players to control their breathing; slow their heart rate and assume the proper skeletal position to successfully put lead on target.

• Spotter: the spotter is the Sniper’s most critical companion on the battlefield and a high level of coordination is key for completing the missions. In addition to the spotter calling out specific threats and suggested shot sequences, new joint missions require synchronized, simultaneous shots between the sniper and the spotter.

To diversify gameplay and make it accessible to the widest group of gamers, CI Games is introducing three difficulty levels that totally change the nature of the game.


• Casual: introduce yourself to sniping in a more controlled way as you learn how the game works while still having fun. The enemies will give you more time to react in certain combat situations. You will also receive an array of tactical and mechanical hints. A red-dot on your target will help you indicate the point of bullet impact, while stealth and teamwork with your spotter will benefit your experience.

• Medium: this level gives you well-balanced gameplay that delivers a more intense sniper experience. Enemies will react quicker and more aggressively, so careful planning will be required. All of the in-game hints and features from Casual mode will still be at your disposal. Stealth and teamwork with your spotter are paramount.

• Expert: this mode is designed for battle-hardened snipers. You will receive a minimum number of hints while on your mission. Enemy AI will test your resolve, tactics and reflexes at every step. You must assess wind and distance on every shot, and control both your breathing and heart-rate. This is where every single shot counts and where one mistake could cost you the mission.

Expanded List of Sniper Rifles: Sniper: Ghost Warrior 2 features the world’s most advanced sniper rifles, each of them meticulously recreated so that they accurately simulate the modern weaponry found on today’s battlefield.

Bullet Penetration: backed by the high-octane stopping power of the modern sniper round which can penetrate a variety of materials, you can now eliminate enemy combatants as they hide behind cover. Taking out multiple targets with a single round is possible and wait until you see it on the game’s Bullet Cam.

New Areas of Operation: in addition to the deadly jungles, we are introducing new urban and mountainous regions, which require new stalking and ambushing techniques.

New Gear: own the night with the introduction of thermal and night vision optics, plus a pair of powerful binoculars critical for locating the enemy before he spots you.

I WAS AMAZED AT HOW MUCH FUN I WAS HAVING

This is when it really dawned on me, and the concept for the game started to come together. This wasn’t your standard military shooter as much as it was a stealth game. The scenarios you find yourself in may have the window dressing of your other military shooters, but Sniper: Ghost Warrior 2 is shaping up into something more akin to Hitman than Call of Duty. Fans of the first game will appreciate a lot of the changes that were made to also prevent this game from heading down that typical FPS path, like the removal of the run-and-gun assault rifle segments in favor of more dedicated sniping gameplay. EGM Now.com

Unlike most first-person shooters, Ghost Warrior 2 isn’t about running and gunning. Also like before, well-aimed shots will net you a slow-motion “kill cam” that follows the bullet as it cuts through the air and pierces the flesh of your foe. The visceral satisfaction you get after watching your cinematic takedowns is unlikely to ever wear off ... Official xbox magazine

I FOUND MYSELF GLUED TO THE SCREEN

The urban-based mission I was shown had the player marking targets with binoculars, lining up and timing perfect headshots, and using battery-powered thermal goggles to spot enemies hiding behind cover or obscured by smoke. Sure, you can still blow your cover and end up fighting for your life, but a skilled sniper will now be able to proceed deliberately from target to target, dishing out long-range shots and close-quarters stealthy kills without alerting the rest of the enemies on the map. Based on what I saw, it seems like City Interactive is really keyed in on the attributes that make the idea of a sniper-focused game appealing in the first place.

I’ll admit to being pleasantly surprised with the new directions the developer is taking with the sequel. Many of the improvements are based on extensive feedback provided by fans of the first game, and it shows. shack news.com

Sniper: Ghost Warrior 2 returns as a silent warrior with a killer new look thanks to the cryEngine 3 purring underneath the hood. Don’t think for a second that this will be just another pretty shooting gallery. Enemy AI now looks to use cover and get as close to you as possible before taking a kill shot. Don’t depend on anything more than your sniper rifle, a knife, and a couple of bullets to carry you through to the end of the mission. This is a sniper game, not long distance Call of Duty. g4 tv
01/

An innovative first in which the way the player touches the controller influences the on-screen shot. Like in real-world sniping, in-game shooting requires a steady squeeze so that when the round is fired, it actually surprises the shooter. Jerk the trigger and the round is thrown off, thus missing the target and alerting a highly motivated enemy to your presence.

Everyone’s favorite feature returns to reward expert shots and show the battlefield from a totally new viewpoint. See what the transfer of kinetic energy – a bullet’s true stopping power – can do to the enemy from 1,000 yards or more!

The bulletcam will reward players for particularly good shots and show the battlefield from an entirely new perspective. Only in Sniper Ghost Warrior 2 are the players allowed to see in such detail the fast moving projectile, when it reaches its target.

Sniper: Ghost Warrior 2 features a comprehensive system of immersive sniping mechanics — the only game that specializes in the art of shooting, no matter how minute the details. It reflects the bullet ballistic qualities and accounts for the human factor, taking into consideration the state the sniper is in. The conditions to consider while taking a shot include:

• Holding breath
Breathing causes movement. Hold it, zero in and feel time creep by and your scope stabilize. This feature is designed to simulate a skill that sniper’s employ on every shot. The availability of this system varies on different difficulty levels.

• Range
A bullet needs time to get from point a to point b. Players need to calculate their distance and bullet travel time when planning a perfect shot, especially on moving targets.

• Bulletdrop and environmental influence
It doesn’t get any more real than this. More precise than ever before, the in-game ballistics system allows players to reach new gaming heights and discharge in-game weapons with stunning accuracy. Crucial variables, including wind speed and distance, will undoubtedly affect your bullet and need to be accounted for when taking aim and firing at enemy targets.

Sniper: Ghost Warrior 2 comes complete with an array of military gadgets, making the gameplay much more fluid and realistic. The job of a modern sniper is not limited to getting into the position and taking the shot. It is also about reconnaissance, spotting enemies, and safeguarding your own position. With gameplay realism in mind, CI Games decided to give the main hero some new gear. Players will be able to use a variety of equipment, including:

• Thermal vision goggles
Snipers are not always able to spot their enemies, especially if they are located inside buildings or hidden behind various installations. With advanced thermal vision, players are able to spot the opponents and plan their moves.

• Binoculars
Long range, rough terrain, whatever the conditions, binoculars are an essential tool for the sniper through the entire game. The player cannot properly evaluate battlefield conditions without them.

Sniper Ghost Warrior 2 adds new urban environments like Sarajevo and treacherous mountain terrain to go along with jungles that are as lush and deadly as ever. Each level brings its own challenges – from constructing the correct hide to properly stalking through the environment – and only the best will be able to move unnoticed by the enemy.

Concealment doesn’t necessarily mean cover. In Sniper: Ghost Warrior 2, bullets behave as they would in real life and a high velocity .50 cal. round is capable of going straight through a concrete wall to kill the enemy hiding behind it. Better yet, line up your enemies and let a single round take out an entire squad. Wait ‘til you see that on Bullet Cam!